“We have seen rapidly-growing interest in the TassatPay™ platform and its ability to enable banks to issue stablecoins, especially since the recent government recommendation that banks be the issuers of this digital currency,” said Tassat CEO Ron Totaro. “The executive changes we are announcing will enable us to scale our operations to the increasing demand while staying ahead of the curve as we build next-generation payments solutions for banks and their B2B customers.”

Kevin Lupowitz joined Tassat in 2018 and has led the company’s strategic research and development initiatives. In his new role, he will have additional responsibility for transferring new and evolving technologies into B2B payments programs. Notably, he will be leading Tassat’s initiatives in an open architecture for blockchain, which is expected to promote innovation in multiple related areas of technology.

Lupowitz has extensive experience at the nexus of financial services and technology. Prior to joining Tassat, he was CIO for trueEX Group, which operated the first exchange approved by the Commodity Futures Trading Commission as a Designated Contract Market for swaps. Other senior roles include serving as CIO for CLEAR, an Identity as a Service (IasS) solution, FXall and Liquidnet Holdings. He holds a B.S. degree in computer science from the City University of New York – Brooklyn College.

In Glen Sussman’s role as President and Chief Operating Officer, he will help ensure continued operational and financial excellence as Tassat expands its footprint in commercial banking.

Sussman brings over two decades of experience scaling technology companies. After launching his career as an Equity Analyst at Schroders and then leading enterprise software investments at Sandler Capital, he held executive roles at several growth-stage technology ventures in New York and the San Francisco Bay Area. Most recently, he served as CFO & EVP of Corporate Development of Video Platform developer SundaySky. Sussman graduated from the Wharton School at the University of Pennsylvania with a degree in Economics, garnering the Joseph Wharton Scholar and Benjamin Franklin Scholar distinctions.

Al Berg’s appointment as Chief Information Security Officer reflects the value Tassat places on ensuring that the company and the TassatPay™ platform meet the highest standards of cybersecurity and risk management, including systems integrity and meeting all standards of resiliency, compliance and risk policies and procedures.

The appointments follow record interest by banks across the country in TassatPayTM. In addition to serving as the engine behind the largest bank provider in this space, Tassat also recently signed an agreement with Customers Bank to provide blockchain-enabled payment capabilities, resulting in $1.5 billion in additional deposits at the end of its third quarter on September 30, 2021.

“Tassat is the digital payments platform that positions banks for the future of commercial banking,” said Totaro. “Our focus on identifying, recruiting and retaining the best talent in technology and financial services will help us maintain our position as the leader in financial technology innovation.” 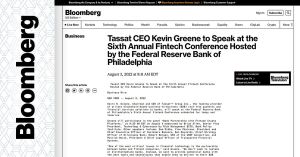 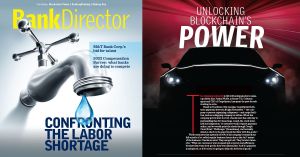 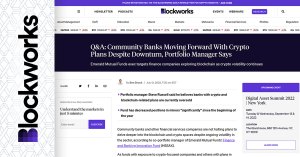 Tassat is not a bank and does not provide deposit or other banking products. Tassat makes no representation regarding the products issued by its customers using Tassat technology.